New Year’s Day, 1993, we were Up North at my parent’s house on the lake. Unbeknownst to me, “the boy” got up early, went downstairs, and gently interrupted my dad’s morning devotions to ask him for his daughter’s hand in marriage. (So old school. So romantic. I loved it!)

5 hours later – halftime of the Sugar Bowl – the boy asked me to show him the playhouse that my dad built me as a kid. Reluctantly I said “OK.” (Just the summer before I’d asked him to come out and see my childhood playhouse. For some mysterious reason he continually declined. Now – New Year’s Day – it’s 20 below zero and all of a sudden he wants to see it!?)

We bundled up and made the short walk through the woods to my gingerbread-styled playhouse. Once inside, he challenged me to climb up in the loft (of which my adult body now barely fit). When I awkwardly found the top ledge, I turned around to show him that I did still fit.  As I flung my feet from the ladder to hanging over the edge, he grabbed my hand, and proceeded to ask me to marry him! His version of getting down on one knee was mimicked by me being above him… again… so romantic.  As the cold made his lips barely talkable, he struggled to ask again… “Will you marry me?”  Between my shock, my freezing tears, and utter joy… I had forgotten to respond.  Through visible breath… I finally said YES!  Six months later I found myself married to the boy… Mr. Tall, Dark, and Handsome and I became one. We began our life together. 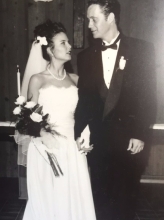 I do have to admit, he was more than just ‘tall, dark, and handsome’ – even more than the man of my dreams. My attraction to him came from a substance in him that ran deep and complemented my shortcomings… and I his. He knew the Lord, he shared that spiritual relationship with me, and with that foundation underneath us… our relationship had – still has – an unchanging ROCK to stand on. We truly were best friends getting married… and still are… despite our imperfections.

So….a couple new chapters in my life had begun. I had found God – really. And I’d found the man I believe He intended for me and I was sure that now I would know how to live a life of peace and balance. No more questions, no more doubts, no more chaos. But that’s not the way God wired me. I was still the same type-A human He’d originally created. And that’s okay! He most definitely has a purpose and a special plan for all of us and all of our intricate ‘wiring.’

“LORD, you have searched me and known me!
You know when I sit down and when I rise up;
you discern my thoughts from afar.
You search out my path and my lying down
and are acquainted with all my ways.
Even before a word is on my tongue,
behold, O LORD, you know it altogether.
You hem me in, behind and before,
and lay your hand upon me.
Such knowledge is too wonderful for me;
it is high; I cannot attain it…

…For you formed my inward parts;

you knitted me together in my mother’s womb.

I praise you, for I am fearfully and wonderfully made.”

Despite reading and knowing the truth of God’s word, I would often find that I was becoming my own best competition… never satisfied with enough. Was this the way God had “hemmed me in?” Was this me allowing Him to be “acquainted with all my ways?” Or, was my personality a road block in drawing closer to Him? I agree that He “knitted me together” but, even though I had come to know Him through Jesus, was I praising Him for what He had made… or was I recoiling the ball of yarn and, in turn, un-knitting what He had so “fearfully and wonderfully made?”  Always biting off more than I could chew; always trying to fit square pegs in round holes; always reaching for the moon. Always, always, always…

During our first five years of marriage, my husband and I were working downtown Minneapolis – living just a short bus ride away in “God’s Country” – NordEast Minneapolis. We were fortunate to be… very happily married. Life was simple and easy. But…..

I’ve never been super comfortable with “simple and easy.” Where’s the challenge in that? I started thinking about having a baby. Surely a baby wouldn’t complicate my life. Right? No… I wasn’t that humble to see through my own personality!

But it wasn’t just type-A-syndrome… No, it really wasn’t that at all – it wasn’t that tidy of a thought. This desire was something honest and real and it came from – well, I don’t know where it came from – the Lord – and it came from down deep, from a part of me I didn’t know I had. We’d talked a tiny bit about having babies, but I had put way more energy into a career and a happy marriage. Children were never really a part of that picture. Until they were.

We were in the middle of him finishing college & working odd jobs; me – working a 50+ hour week job & graduate school; remodeling our house; and learning to be married. So when I presented the whole baby idea to my husband, he looked at me all clueless – sort of the way I looked at him when he wanted to see the playhouse at 20 below. He often has the more realistic view on things – sometimes leaning pessimistic.  Well, you know my angle – overly optimistic – nothing’s impossible – partially realistic. And then, according to him, I lied to him – twice.

My first lie (according to him) was that having a baby would not much change our simple, happy life. I really said that!  Two decades and two kids later, I know now that that was a ridiculous thought, but not a lie because at the time… I did actually believe it.

My second lie (according to my husband) was that at my ripe old age of 30, it would probably take a couple of years for us to get pregnant… three weeks later I was interrupting his Twins game on TV to tell him that I was, in fact, pregnant.

“But we have this treasure in jars of clay, to show that the surpassing power belongs to God and not to us.”   2 Corinthians 4:7

Nine months later, the next new part of my life began…

*This document is the sole property of L. Marie Drake © 2017.  Permission granted for printing copies of this page on the basis they are not used for personal profit or any financial gain. Thank you.*